Just a little long story
I had to share…. 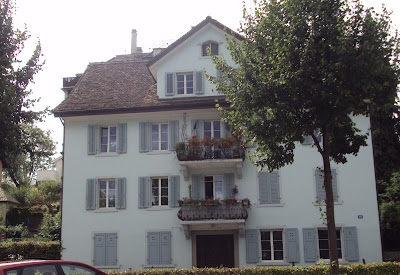 ~ a beautiful house in the neighbourhood, with shutters! ~

You know when you feel your heart is going really fast and panic starts to kick in?
I don’t mean panic caused by something dreadful, but panic all the same….
This morning,
I went to the garbage place where you can bring household refuse. I dumped more cardboard, some trash, two pieces of wooden fence and 7 garbage bags filled with old magazines. I was in a hurry because they would close in 5 minutes for lunch. And I am long enough now in Switzerland to know, that the Swiss don’t kid around with their lunch. It’s not far away from being sacred.
So I needed to get everything quick out of my car.
I ignored the iron lamp who passed me by on a man’s shoulder, or the lovely wood laying all by it self in the container next to me. But when my eyes caught something creme, high stacked one on top of the other,
well my friends, I could not resist to take a better look.
And I couldn’t believe what I saw.
There where at least a 150 creme painted wooden shutters, filling up and almost overflowing the container. They were waiting for their turn to be burned or crushed. My jaw literally dropped and I grabbed the first employee at his shirt, asking him if it was OK for me to take two (I didn’t want to look greedy…).
He nodded yes and I was so happy!
I started pulling and shoving and pulling and shoving and….
you get the picture, nothing moved at all.
Still, no panic in sight yet.
I marched over to another man, who almost was starting his sacred lunch. I asked him if he could lend me a hand to get two of the shutters out of the container and I smiled my best smile. He left the table, only to turn to his colleague to ask him something. His colleague, a very tall Swiss guy (I never saw such a tall Swiss man actually…) just looked at me and said “No”.
Me: “What do you mean, No?”
He: “No, it’s not possible to get something out of a container once it is inside”.
And action: Panic!
Me: “Ok, ok, no problem, but are you sure?”
He: “Yes. No, it’s not possible”.
Me: “But why not? In the Netherlands they ask good money for these shutters!”
He: “No, it’s the rule here”.
Me: “But why?”
He:  “I don’t know why, but my manager will kkkrrrttt me if he finds out!”
And he made a cutting move with his finger across his throat.
I didn’t care about this poor man’s head being chopped off, I wanted my shutters!
Me: “So your manager isn’t here right now?”
I said this with my nicest voice possible,
the panic now starting to tell my heart to go faster and faster, which it did.
He still said no, as a real Swiss man would do.
And then, I did the unthinkable. I begged.
I begged in my sweetest German “Bitte, bitte, bitte Sir!”
I learned that from the best, my youngster daughter!
(she is a master in begging, German and English).
It didn’t work.
Then I even folded my hands, like in prayer and almost closed my eyes, but didn’t,
I needed to hold eye contact (lesson number 1 in begging).
I begged and begged and even jumped up and down a bit, looking at the time and seeing that the front gate was already closed. It was lunch time and he was looking at me, like he just saw me for the first time.
And then….. he smiled!
He: “Ok, ok! Zwei!”
Me: “Oh Danke, danke Sir!”
He even helped me
with the heavy part of wriggling them out of the container!
Now I am the proud owner of two beautiful creme painted old shutters!
No clue what Sweetheart will say about them but they are here to stay!
So if you see a woman with a big smile plastered around her face,
she probably begged for something and got it!
*
Note:
I still can’t find my battery charger for my camera, aargh!
As soon as I have it, I will show my two shutters!

13 thoughts on “The begger and the tall Swiss man”