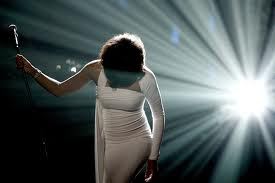 While growing up, we all make special memories….

Some of these memories are moments in your life you just never forget….

I remember my very first concert as one of these moments…

But I knew I would not faint….I didn’t want to miss a single thing of that night…

Honestly, I remember it all very vividly….

The billboard photo’s hanging on the outside of the stadium, I could see them while I was still in the train….

Her big smile, her beautiful face….I couldn’t believe I would hear and see her very soon….

People were screaming and acting all excited…..she really was here! In our little country….singing….for us!

I was a little disappointed to see that our seats where not the first row in front of the stage….

Still, I had a very good view of the show that was about to start…..
She came….she song her heart out….and again, she won my heart with every note that she song….

And later when she cut her hair short, I did too… I wanted to look just like her…. yes, I was a big fan…..

I still have a VHS tape (yes, those were the days…) with her singing at a Nelson Mandela concert….
Every move she made, I would copy it….and I made people watch the tape even if they didn’t really liked her that much…..Every song I was singing out loud, word for word…..not that I can sing, but I didn’t care….

More concerts followed after that first one, but that day, when I saw her singing live for the very first time,
that day I will never forget….

Her songs touched many hearts, not only mine….

So when I heard the sad news this morning, I couldn’t really believe it…..

Even my youngest brother called specially to tell me if I had heard the news….
he remembers how I loved her music….how she was a big part of me growing up….
how can he forget his sister “singing” her love songs….

But at least her music will live on….
So that more generations will be able to hear what a great singer she was……

And yes, she made some poorly choices in her life,
but her voice, when it still was at its best…..yes…..her voice I will miss….


her great voice sings no more….

One thought on “She sings no more…”